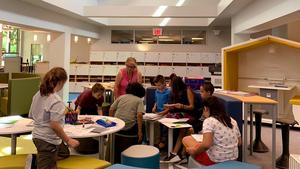 Earlier this school year, the Eden Park Elementary School’s new Learning Community was officially dedicated by Superintendent Jeannine Nota-Masse, School Committee Chairperson Dan Wall, Daniel Parrillo representing the Mayor’s office, and Eden Park Principal Courtney Sevigny. Joining them were Chief of Facilities Management and Capital Projects for Cranston Public Schools, Ed Collins, and guests from around the city of Cranston and from all across the state. Also present were representatives from Fielding-Nair International, Shawmut Construction, and Jacobs Engineering who have been critical partners in this project.


The Eden Park Pathfinder Project was a two-month $9 million construction project which has brought the intermediate wing of the school into the 21st century, and now serves as a model home of sorts, for all of our school district’s projects going forward. Those in attendance had the opportunity to tour the cutting-edge educational facility and learn more about the design process, the ongoing professional development which has taken place for educators for the past year, as well as the educational uses of the space, from the Eden Park educators and student ambassadors who were on hand that evening.


The educational space at Eden Park mimics the types of teaching and learning spaces our students will encounter as they go out into the workforce and as they continue on in their post-secondary education journeys. It takes advantage of the available space within the original footprint of the school which was formerly underutilized, such as the hallway, for example, which is now utilized daily as a learning space. One focus when designing the Eden Park Learning Community was to include student centered collaborative spaces that support technology and also support a wide variety of teaching and learning situations, from small group and independent study to whole group instruction or one-on-one with a teacher. The space also emphasizes the importance of teacher collaboration and includes work spaces which allow teachers to work both independently and collaboratively.

Recent data collected at Eden Park Elementary School for the first months of the school year already shows increased student engagement, decreased rates of absenteeism, and increased collaboration between teachers as well as from our Cranston community partners.